I went to Philadelphia a couple weeks ago to speak at a library event about makerspaces, maker-culture, and co-working in academic libraries. My presentation was about the design studio we built in the GT Library using very little high-end technology. One of the things I say whenever I’m talking about this space is “I am not a proponent of 3D printers in academic libraries. There are many people who think we ought to have them, and I feel like it’s my duty to be a voice for the opposing view. Please argue with me and change my mind.”

My argument against 3D printers in academic libraries goes a little like this: 3D printers belong in a fabrication lab or an industrial design studio that serves a particular college or discipline for which it is an essential tool. Putting one in the library is a little like building a darkroom in the library: certainly you can make the case for the darkroom as promoting creativity and self-expression and thus being appropriate for a library, but now you’re on the hook for a lot of supplies and technical knowledge that are too niche to justify.

The next presentation was by Megan Lotts of Rutgers, entitled Implementing a Culture of Creativity: Engaging Events and Making in the Academic Library, in which she also disparaged the trend of 3D printers in academic libraries, citing the very untechnical and material joy of art-making and crafting in the library as a cheaper, more engaging alternative to the lathe, CNC router, and 3D printer makerspace.

And in the middle of her presentation, this tweet appeared in the program feed:

Some anti- #3dprinting sentiment at #tclc2015. The reasons reveal a narrow view though. Not just for engineers and scientists.

I was excited for a chance to follow up with someone who wanted to argue the point. Greg and I connected before the program was over and talked about it, and he convinced me. It was so simple that I felt like an idiot for not getting it before. My only excuse is most of the points for 3D printing at the Georgia Tech Library boiled down to “It’s super-cool technology and the bulk of our students are engineers-in-training who want to use them.” Greg, however, presented the multidisciplinary and forward-thinking argument.

You can use a 3D printer to create objects that embody data, i.e. “A New Way of Representing Data.” And with that, my mind was expanded: 3D printers can be a tool for scholarly communication, for pedagogical experimentation, and for exploring how one can visually display quantitative information in any discipline. It is exactly what should be in the library.

So now I won’t make the anti-3D-printers-in-the-library argument anymore. I need to find a new trend to be grumpy about. 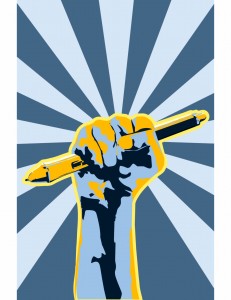 Here’s a bunch of supplemental stuff to follow along with my presentation (if I’m in front of you talking right now) or to browse for fun and inspiration.

A link to Isaac Asimov’s essay On Creativity

A link to Georgia Tech’s Flashpoint

The syllabus for the class in the Library GT 2803 syllabus

The slides as a PDF TinkerTeacherMakerSpace2015